A Trip to the Shipyard

I recently had the pleasure of sitting down and talking to new SFL expansion team owner Jacob Bouvette of the Portland Fleet. What I discovered was an interesting and intelligent man who has a vision for his franchise that sounds like a winning formula. Residing just 4 hours from Portland itself, Jacob owns multiple businesses outside of the SFL that not only keep him busy well outside of his time in the league, but he carries over experience of what a successful franchise will look like.

Jacob is a well-rounded guy who has spent his life around multiple sports. He has a hard-nosed wrestling allure to him, as he wrestled years ago, including overseas in multiple countries. He played football through high school, and has coached younger kids in the sport as well, coaching junior high and high school wrestling, as well as competitive women’s softball. A vast coaching background in multiple sports is one of the many ways he brings a different approach to his franchise.

He found the league with close friend and recently hired Portland Fleet Defensive Coordinator Chuck Hook. The two of them were intrigued from the start, and knew the SFL was something that both wanted to be involved with in some capacity. Jacob’s path to franchise owner is one that is not typical, and certainly one of the more unorthodox stories in the league’s history. He joined as a rookie before Season 14 and had interactions with Denver Nightwings owner Jeremy Vega, which put him on the fast track to becoming their rookie offensive coordinator and head coach to the leagues defending champions. Hired in Week 4 of Season 14, Jacob greatly contributed to the Nightwings 6-6 record, with the team just missing the playoff window. When we spoke, he explained that he feels he owes a great deal to Vega for having faith in him and giving him such a big opportunity so quickly. He said that from the first moment when he first entered the league, he knew he wanted to own a franchise. When the opportunity arose for him to apply for a team in the expansion process for Season 15, he was determined to come out with a franchise of his own. 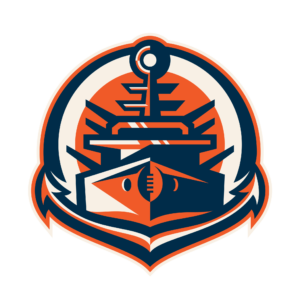 We spoke about how he came up with the team name Fleet. Being a guy from the country, and loving to be out on the water and around boats led to his picking of the name. Fleet isn’t just a military term, but a group of boats or ships acting together to achieve a goal – that was the motivation behind the team name. The color scheme was from a mixture of inspirations including the Coast Guard, as well as a few favorite sports teams.

When asked about the process that he went through to become an owner in the Simulation Football League, he said the application part was easy. He knew he would be persistent with the league and other owners in his pitch to them to prove he was the type of guy who was not only worthy of joining them as an owner, but the kind of owner they would want with them to represent the league. Bouvette said that waiting on the decision as to who would be awarded the 2 franchises was nothing short of nerve-wracking, all the way up to the announcement during the Season 14 Championship game.

In what seems like a pay it forward type thinking, when Jacob was with the Nightwings, he came across a rookie Nelson Lozano. According to Jacob, he and Nelson clicked from the start, and he knew he had something in Nelson that Jeremy had seen in him. Upon getting awarded the franchise in Portland, he trusted his gut and hired Nelson to be the first General Manager in Portland Fleet history. Now surrounded by people he trusts and has worked with before, Nelson, Chuck and Jacob will begin the process of building a winning team and culture in Portland.

When discussing the upcoming off-season and inaugural season for the Fleet, I asked if now that he owned a team, would he be treating his players any differently than his time in Denver. Without hesitation he responded with a firm “No.” When I asked why, he clearly stated that he is confident in his ways and although he plans on working collaboratively with his GM and DC. Bouvette said that he feels what he took from his time in Denver with Jeremy Vega got him here, so there is no need to alter the course. When I asked what would be considered a successful 1st year in Portland, he answered that a .500 record and being competitive in all of their games would be a success.

Concluding my interview, I asked Jacob one final question: what does he wants the league to know about him that they may not already know? In a genuinely honest answer, he told me, “I want to have fun and meet new people around the league. I may seem quiet and shy, but trust me, when it comes down to it – its all gas and no brakes. This is all about one thing, and that’s to show that a rookie owner and staff, with what may very well be a roster made up of a majority of rookies, can shock the SFL and the world!” We’ll wait and see, as the Portland Fleet take to the open sea for the first time in Season 15.